About the Steel Tongue Drum 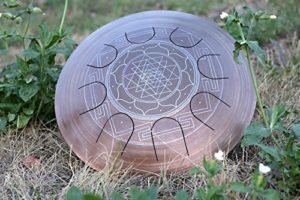 The Steel Tongue Drum is also known as the Tank Drum or Hank Drum.

The original tongue drum design was created by Jim Doble, who invented the “Whale Drum” in 1990. These metal drum instruments are much larger than your average tongue drum, with the first whale drum being made out of an old steel water tank. Jim Doble currently continues to make whale drums as interactive musical playground equipment. These giant drums, some made out of 500-gallon propane tanks, are bringing joy to children and adults alike. You can check out more examples of his work over on his website at elementaldesign.me

The first metal tongue drum made in the Hang style that we commonly see was invented by Dennis Havlena in 2007. Dennis named his version of the tongue drum, Hank Drum (Hang and Tank combined). It's worth noting that before the Hank Drum was invented there were a number of forerunners. You can read more about its predecessors and the history of the Steel Tongue drum on our Hang History Page.

Since 2007, many inventors have created their own versions of the instrument. Due to the success of the Hang, hand pans are becoming increasingly more popular.

* Note that the sound of tongue drums vary greatly depending on their size and how they are designed.

They're a cheaper alternative to Handpans 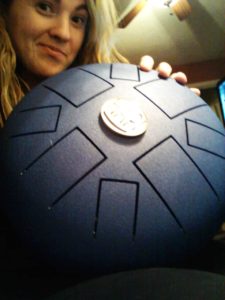 Tongue Drums are cheaper than handpans. A lot cheaper.

The PANArt Hang is no longer in production. The only way that you can get your mitts on a genuine PANArt Hang is to buy a second hand one from Ebay or Craigslist. PANArt still make similar instruments to the Hang, which you can check out here.

Second hand Hangs are not cheap (click to enlarge image of recently sold Hangs on eBay).

Hang replicas often range from the $1,900 to $3000 mark and aren't always an option for most folks due to their high price tag. As a result of this, Steel Tongue Drums are becoming more and more popular because they are far less expensive is comparison.

You can expect to buy a steel tongue drum for sale for around $200 - $800. They're also a lot easier to get your hands on as opposed to the hand pans made in the Hangs image.

Do they sound as good as the Hang?

While the answer to this question is of course subjective, I think almost everyone would agree with me that the Hang style hand pans sound much better.

I have found that the Steel Tongue Drums don't sound as loud as the Hang. Especially when they are played with the musicians hands and fingers. Because of this, Tongue Drums usually come with a pair of mallets. While the mallets make the instrument louder, they also take away the texture and diversity that comes with playing with the hands. For this reason I don't personally think they sound as good. They still sound great! Just not as magical or as diverse as the Hang.

I have found that larger Tongue Drums are louder and reverberate their sound more. For this reason if you're going to buy a steel tongue drum, I suggest you buy a big one rather than a small one like the Hapi.

There's a lot of variety to choose from

The Tongue Drum is quite easy to make. Because of this, there is a lot more products and brands to choose from compared to buying a Hang replica.

Steel Tongue Drums come in a lot of different designs

Free worldwide delivery to your door via UPS, FedEx / TNT or DHL.
Returns are accepted within 7 days of the instrument being delivered.

Pay for your instrument via PayPal, Credit or Debit Card.